Yet another exhausting day. After breakfast (which was pretty late today because I woke up late), I headed to the Apple Store in 5th Avenue. Instead of taking the subway, I walked all the way down through Central Park which accounts for 40 streets and a couple of avenues. Doing so was pretty nice, as the views in Central Park are amazing — and which is the reason why my camera had 93 photos when I got home. Lots of tourists along the way, though, and a rather funny sign along the way: 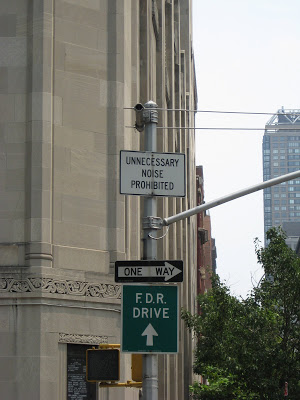 Once in the Apple Store, I went downstairs. Wow. The place is big and really nice. But it was crowded. Stayed there for quite a while, trying their gadgets... and I think I want a real iPod. You know, the Shuffle I now have is OK for running... but not for other "styles" of listening to music (e.g. at work, on the plane...). Even though, I'm not sure which one I should get: the Nano is cool for running (no hard disk), but the Classic can perfectly hold all my music library. Even though, getting the Touch is stupid; I'd rather get an iPhone 3G for that price and size.

Out of the store, I felt hungry so I tried one of these typical hot dogs shown in virtually all movies and/or TV series recorded in NYC. Rather disappointing, though, because they are way too small... so when I got home I had to have real lunch.

After the hot dog, I walked to Rockefeller plaza  to see what was it and then entered the NBC Experience Store. I saw a couple of nice t-shirts from Friends: one said "We were on a break!" and the other "How YOU doin'?". I think I'll eventually get one of those. But I should hold on the compulsive-buying feeling I'm experiencing...

And then I went to Times Square again to take a some (many) photos. Unfortunately, my journey ended there because it started to rain. So I entered a shop, bought a NY t-shirt and returned home much earlier than I wanted. It was only 4pm. Should I have waited for half an hour or so, the rain would likely have stopped.

As mentioned before, when I got home I had some more lunch, surfed the internet a bit and went running through Central Park taking a different route than the other days. Very, very nice. This is something I will miss a lot when moving to another apartment downtown :(
After the running session, I had dinner and... I can't stay here! So... I went out for a walk to see if I could find any nice bar to have a drink. Nothing. What a crappy neighborhood! Well, in fact I saw a couple of bars that seemed promising, but they were rather empty. Will try again another day.