Task tracking and the Bullet Journal

iGTD, Things, Org mode, OmniFocus, Google Tasks, Trello, Google Keep… All of them. All of them I have tried over the last few years and all of them have failed me in some way — or, rather, I have failed to adjust to their idiosyncrasies. Part of it is because the overwhelming feeling that builds up after days of continuous use due to how easy it is to end up with never-ending piles of open tasks.

In other words: even after making the effort to adjust to these systems, none of them have really worked for me. The one that kept me on track for the longest was Org mode, topping at three months of continuous use plus some more months of occasional use, which is nothing for a system that is supposed to help you plan your day, week, month, year and, well, life.

But about nine months ago, I made a discovery. I stumbled upon the Bullet Journal: a simple yet effective system to track tasks using traditional pen and paper. After watching the introductory video and giving the system a test drive for a week on an old notebook, I set out to invest a few extra dollars into a nicer journal: 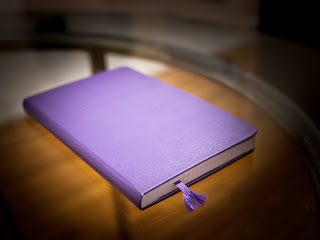 Nice notebooks are “pricey,” and that’s why I bought one: the point of the exercise was to trick myself into using the shiny new purchase… and the trick worked for long enough to hook me into the system. Not surprisingly though: previous experiments of mine at tracking tasks with a simple and unstructured sheet of paper resulted in productivity boosts and a feeling of accomplishment that I did not get otherwise.

What is the Bullet Journal?

The Bullet Journal is an extremely simple notebook-based task-tracking system designed by Ryder Carroll. At its core is something called Rapid Logging, a set of trivial rules to record, in a chronological manner, tasks, notes, and events. The system adds some more structure to this by dividing the chronological list of items into days or topics, and by outlining a monthly spread and task management workflow.

It is interesting to see how such simple concepts can work so well in practice and, especially, how popular this system has become over the last couple of years. Just look at the Google+ community behind this methodology and the success of Ryder’s Kickstarter project to see what I mean.

Monthly review: the best part of it

The monthly review is the part of the Bullet Journal system that I enjoy the most and the part that truly makes me feel the usefulness of the system. 9 months and 100 pages in and I can reflect and see that this system has made a positive difference in my work. 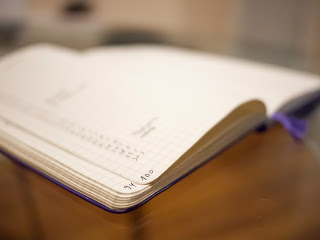 If you have ever read David Allen’s Getting Things Done, you know that regular reviews are essential to ensure that the contents of your system are up-to-date and remain relevant. While it is easy (for me) to overlook this important thinking time with a computerized system, it is pretty much impossible to do so with a notebook system because of its linearity: when the next month arrives, the preparation of the new monthly spread triggers the review of the previous month.

That’s, precisely, why I like it. According to the Bullet Journal guidelines, you should consolidate all of your pending tasks from the last month into a “carryover section” in the current month. Because the system is chronological and paper based, the implication is that this consolidation involves manually copying tasks from previous pages into the new month. Sounds burdensome? Exactly, and that’s why this works so well: having to copy a task over will push you to decide whether the task is still relevant, whether the effort to do it at that point is lower than copying the task, or whether the task can be moved to the calendar because it now has a deterministic start/due date.

This consolidation step into a new monthly spread is also critical in keeping your journal manageable. Because all tasks are consolidated into a new month, you are left with a reduced set of pages to go through to locate open tasks. In my case, I only use about 10–15 pages per month, which means that this is the amount of pages I have to review on a daily or weekly basis to see where my projects are at.

My own tweaks: habits and weekly planning

Another great aspect of the Bullet Journal—or really, any journal—is that it is free form: if you don’t like the rules, just come up with your own. To that extent, there are plenty of ideas online in places such as the aforementioned Google+ community, a multitude of blog posts, and at some point the new web-based portal that Ryder is working on.

Personally, I have adopted two tweaks inspired by what other people were doing.

The first is the incorporation of monthly and weekly goal-setting sections. These take the form of lists of coarse-grained tasks representing goals, and these lists serve as the basis from which to derive finer-grained tasks when planning the current day. These tasks representing goals cannot be easily accomplished, but that’s by design: the idea is to use them to distill more specific “next actions” while at the same time having some kind of status record of your week and month. 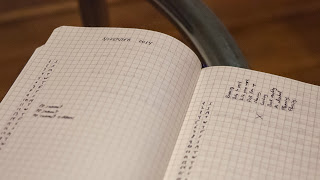 The second is the tracking of habits. In my monthly spread, I reserve the right page to track a bunch of habits I want to build. I do so by matching up various columns to the calendar days and then just crossing out the tasks on the days when they are done. These include things like reading, cooking, shaving, or commuting by bike.

So far, I have only gotten so-so results from these two tweaks. Especially, the upfront planning that is necessary to make goal-setting work is a habit in itself that needs to be built, but an important one as plenty of productivity books will teach you. (See Decide by Steve McClatchy or The One Thing by Gary Keller.) When I spend time planning ahead, the following days are much more productive; however, without the ingrained habit, it very easy to get side-tracked and end up not doing any such planning.

The one thing I haven’t really yet figured out is managing long-term planning with the Bullet Journal methodology.

An idea that comes to mind involves keeping individual pages to jot down project milestones and week-to-week expectations, but I’m not sure that would be easy to deal with: somehow I personally need the ability to visualize the timeline of the project on a calendar with all the time impediments that may exist. In this regard, I have been happy at work by depicting the available time as a collection of weeks and drafting the expected status of each project on those future weeks.

Also, the calendar spread proposed by the Bullet Journal is of limited value to me. I am very used to the online Google Calendar for timed appointments, and I am now abusing it to also mark tasks that need to be started at some point in the far future. For example, I now trust the Calendar system to remind me, five years from now, to renew my passport.

Again, the system is so free form that you can play with your own ideas on how to manage your tasks. Whatever suits best your workflow, go for it; and if that means combining the journal with an electronic system, so be it!

To this day, I am still surprised what a difference pen and paper has made on my productivity compared to computerized task tracking systems.

Sure, I sometimes miss the ability to access my system anytime, anywhere. But having a system that is always-on is useless if the system is forgotten. Carrying a notebook around has forced me to think about what I write in it and to want to look at it later on.

Give it a try. Do so by visiting the Bullet Journal website and watching the video.