About three weeks ago, I got a Nexus 9 and its accompanying Folio case+keyboard at work with the main goal of drive-testing Google's mobile apps. 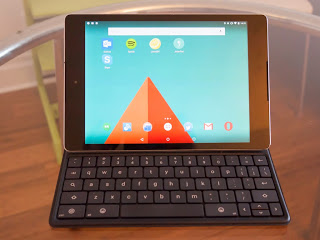 Being "free" hardware for testing I could not turn it down, but at first I honestly was not sure what to do with it: I already got a Nexus 10 last year and exchanged it soon after for a Nexus 7 because I did not did not like its bulky feeling. The Nexus 7, on the other hand, is the perfect size for reading news, articles, and books, which is basically the only thing I (used to) do with the tablet.

Let me say upfront that the Nexus 9 is a really nice tablet. I have been carrying it around every day since I got it just because I want to use it—I'll get to why soon; bear with me for a second.

Hardware-wise, the tablet looks great and feels well-finished, which is something I could not have said of the Nexus 10. The screen is gorgeous and, what's interesting is that its 4:3 aspect ratio feels just right. (Yes, yes, this is the aspect ratio all screens used to have back in the day. Going back to basics?)

Software-wise... we have Android Lollipop here and, well, let's just say I am not impressed. The hardware in the Nexus 9 is more powerful than what I've got on my Nexus 7 so the tablet is indeed more fluid (how could it not)... but it still feels sluggish in general. Anyway...

I have mixed feelings about the Folio keyboard+case combo.

As a case, I am always afraid it won't do its job because it attaches to the tablet purely with magnets so I'll better not drop it on the floor, ever. On the other hand, this works great should you need to attach your tablet to your fridge; keep that in mind.

As a keyboard, the layout is cramped due to the keyboard's size—almost like a full-sized keyboard but not really; I suspect that if you have big hands (I don't), you won't enjoy typing on this. However, the overall feeling of the keys is reasonably good for a chicklet keyboard, which permits touch-typing at decent speeds.

Unfortunately, the designers of the Folio have gotten this "view" of how things should be in the Android world that I personally cannot understand. No Caps Lock? OK, I can let that go because I can't really code comfortably in this thing... but no ESC key? Really? This is a great keyboard... except it isn't because no ESC key means there is no good way to use SSH (assuming you are a vi(1) user, or a set -o vi user). In fact, if it wasn't for this little detail, this device would be a great on-the-road SSH client.

Lastly, little-known (?) fact: the Folio's keyboard is completely useless on metallic surfaces. If you happen to place it on a metallic table, the circuitry gets confused thinking that you have folded the case and shuts the keyboard off; huge problem for me at work where many relaxation areas have metallic tables. Watch out for you local cafe's tables as well!

The Folio does not have a trackpad, nor a pointing stick, nor a trackball: that's correct, no pointing device. Or does it? 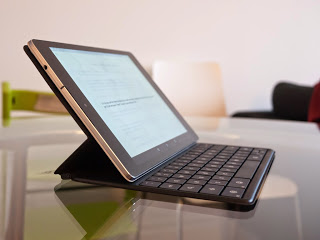 For the first couple of days, the lack of a trackpad or similar device was annoying. I am extremely used to my MacBook Pro's trackpad and my Magic Mouse with its support for gestures, and none of this was to be seen on this setup.

Except... hold on... there is a touch screen! The feeling of raising a hand to touch the Nexus 9's screen was odd at first, particularly because I hate poking at computer screens due to how dirty they get. But this is something you get used to quickly, very very quickly. The ability to just poke at things feels natural and turns out to be quite useful. In fact, I have caught myself poking at my MacBook's screen once or twice already. Oops!

And, finally, the use case

So what could I use this device for? I didn't know what to do with it really, but I did want to give it a honest try.

Read email? It is good enough, but not as convenient as a desktop email client when you receive hundreds of messages per day. Read books? It's quite heavy and big: the Nexus 7 fits the bill much better. Coding or systems administration? See the issues with SSH above. Watching videos? I have a Chromecast, thank you very much.

This device did not provide me anything that I could not do with any of my other devices: in fact, Android, for a power user, feels limiting: the inability to see more than one app at once, the sluggishness of switching between already-open apps, and the reduced set of supported keystrokes makes some tasks just too difficult.

But I think I discovered the true potential of a tablet with a keyboard (for me, that is): writing. Nonstop writing. And by that I mean no copyediting; just purely writing text without applying any fancy formatting, nor messing with the layout of an article, nor anything else.

Why? Because the whole setup provides an immersive experience to whatever you are doing: apps are full screen and notifications can be easily disabled and/or ignored. The keyboard may surely lack special keys, but it has all you need to type text. With the right writing app, it is really easy to get in the flow and to be freed from constant distractions.

In fact, I have already drafted multiple articles for work and for this blog much faster than I could have on my laptop or workstation. It is that great. For pure article drafting, I am in love.

And what can you write with?

My first attempt was to use Drive Docs—Google's full-blown word processor—because it comes pre-installed. Yes, it works, but it has a "problem": Docs has enough features to be distracting. Because the features are there, I invariably get sucked into setting the right typeface, or the right heading structure... As any good writer (not me) will tell you, avoiding all editing during the initial stages of writing is a very good way to create a first draft: a braindump you can later iterate on. 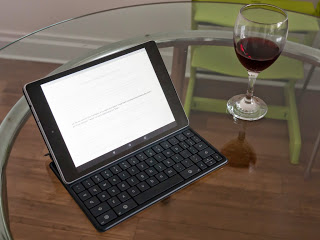 So I went out to research "plain-text" writing apps, and offline at that if at all possible. I tested a bunch and there is one that quickly caught my attention: JotterPad.

JotterPad is this little text editor that follows what-I-think-are all the Material Design guidelines and thus flows correctly in the Android Lollipop environment. It is a simple app that just "feels right" and just works, which is something hard to find these days sadly.

Feature-wise, JotterPad is very limited, but I do think that this is its killer point. A lightweight app that behaves nicely and does its advertised job correctly. With JotterPad and with its "Typewriter mode" setting enabled, you can write pages and pages non-stop without even realizing. Seriously, if you have anything to write and you have your tablet around, give this little app a try.

(I know, I know, this is a sales pitch. But, in fact, this particular app is what triggered me to write this article in the first place and the authors are very receptive to feedback. So they kinda deserve it!)

So yes, I now think that a tablet operating system with a real keyboard has one specific use-case for me: focused work and, in particular, distraction-free writing. Your mileage will certainly vary, but those are my current thoughts regarding this device and software combination.

(Numbers? This post clocks at about 1250 words and I jotted down the first 1000-word draft in like 30 minutes! That's about 65 WPM, which I think is decent considering that this was not just typing: it was composing text from scratch.)